The size of the battery actually depends on the Bluetooth earpiece. Some of the more basic earpiece models run on a single AAA battery, the kind that you can find in any shop. Others, however, operate on a Lithium Ion Polymer battery. This battery is usually just a little smaller than the main body of the earpiece itself. 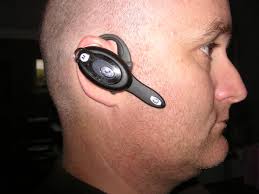 The battery is often (but not always, as you will read below) small enough to fit inside the earpiece itself, so they tend to only be about an Inch in total length and only a couple of millimetres in diameter (yeah, I know, I mixed my measurements, get off my case already…).  The external batteries I’m talking about below are a little bigger, but even they are typically not much bigger than 2-3 Inches long.

Now, the received wisdom regarding rechargeable earpiece batteries is that you cannot change the Lithium Ion batteries once they give out. It is also said that you cannot improve battery life by adding better batteries to your earpiece, both edicts are actually untrue. If (for whatever reason) you are emotionally (or physically, hey, I’m not judging) attached to your earpiece and you don’t want to buy a new one, then it is actually possible to replace the battery. It’s a bit tricky, but this is how it’s done.

First, you have to obtain a new Lithium Ion battery (obviously). Then, you remove the outer casing of the earpiece itself.

Inside most Bluetooth earpieces, you’ll find a circuit board, which is attached to the earpiece’s own internal Lithium-Ion battery (usually by a couple of wires). Nudge the board and the battery loose until they are separated and easily accessible. Next, cut the wires carefully, severing the link between battery and board.

Now, carefully solder the remaining wires together with the new battery’s wires (or the new battery itself, depending on what model you happen to be using) and fold the whole thing back together just as you originally found it. If you’ve gone for a better battery, your new external battery ought to work just as well as the old one did, except with a far greater battery life and thus, far better talk time. The external battery can be a bit of a pain, so I don’t recommend this procedure unless you are absolutely sure that you want it.

If you’ve opted for the same battery again, then the approach detailed will also work, but you’ll be without the added annoyance of having a much bigger earpiece.